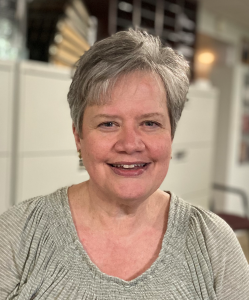 With her husband Manny, Barbara began the ministry in 1991, and until 2000, she and Manny resided in the Koinonia House of Wheaton, where she was involved in discipling men just released from prison – providing the “motherly touch” to the household.  The Mills were privileged to share family life with more than 20 men during those years.

After 10 years of homeschooling her two sons, Barbara returned full-time to the ministry in 2009.  She currently serves as operations director for the ministry, where her key roles include financial and tax reporting, database management, planning and implementing board meetings, and ministry promotion.  A gifted vocalist and Bible teacher, Barbara also enjoys ministering with Manny in prisons and churches across the United States and abroad.

Barbara earned a B.S. in Bible from Cairn University (formerly Philadelphia College of Bible) where she also worked as administrative assistant to the president and academic dean.  Upon moving to Wheaton, Illinois, she continued to use her administrative skills at the international relief and development agency, World Relief, serving the maternal/child health and income generation programs.

Barbara also served for nine years on the board of directors for WorldVenture, an international mission agency based in Littleton, Colorado, seven of those years as board secretary.

The Mill family has grown over the years, and Barbara greatly enjoys keeping track of their five adult children and spouses, seven grandchildren, and soon-to-be great-grandchild.

In 2015, Barbara and Manny co-authored Radical Prayer:  The Power of Being Bold and Persistent (Moody Publishers), a book birthed from their experiences following a car crash in which Barbara suffered the loss of three fingers.  Her talk, “Lessons Learned from Missing Fingers” has been an encouragement to many.

Let us know if you would like to invite Barbara to speak at your event.